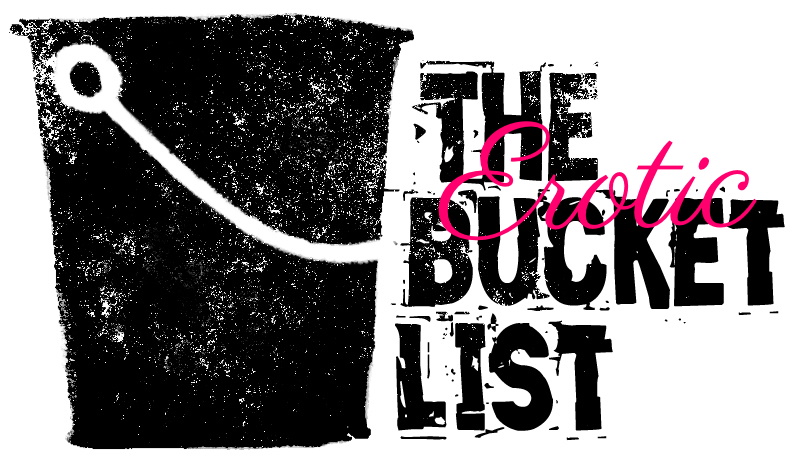 I’m not known (oddly enough) for being very sexually adventurous or creative. I write about sex, I know, and I write a lot of fantasy fiction, but in my day to day sex life, I tend to be pretty pedestrian/vanilla (aside for my hunger for Dominance). That doesn’t mean I don’t have my own fantasies, though. And as Mr. D and I use this year to uncover and unlock some of our deepest fantasies (and fulfill a few for each other), I’m going to continue to keep tabs on the things that come up that I’d like to try, small and large, simple and elaborate. It’s more of a collection place for me, but I thought it might be interesting for a wider audience. Maybe you already have a sexual bucket list of your own. Maybe you’d like to start one. And maybe you’re just interested in what someone like me might put on her bucket list. Whatever your reason for being here, I hope it proves helpful or interesting.

Yellow = I’m not quite ready for this.

Red = This one pretty much terrifies me, but I’m trying to keep an open mind – and the idea is boiling somewhere deep inside.

Wax play. (I’m not a fan of pain, but I’ve always be tempted to try this one.)

Sensory deprivation. (We’ve done a little of this, and I liked it, so I’d be interested in continuing to learn how this could be used to heighten arousal. I’d also like to try adding VR, as I read about it recently on another writer’s blog.)

Rope play. (We’ve toyed with this some, but I’d like to explore it in more depth. I don’t particularly want to cut off circulation to vital parts of my body, but, the beauty of this kink captures my attention.)

Sex in a public place. I’m terrified of getting caught, and I’d be mortified if I was arrested for public indecency. However, the thrill is just so enticing.

Being fucked/used by more than one man at a time. (It’s hard to admit this one, because I’m sort of afraid of it actually coming true, but I’ve always had this fantasy).

Get a nipple piercing. (This one is really just a maybe…I have such sensitive nipples already, and I’ve heard they are tough to heal and only add to the sensitivity. I’m not sure that’s really necessary in my life.)

“Arranged” anonymous sex. I’m not sure how to explain this one…but it’d be like – my Husband would find a guy who I would be arranged to meet in some public place and then head somewhere (a car…an alley…a bathroom…) for “anonymous/never again” sex (This isn’t one I’d jump right into. Some smaller, less scary bucket list items would have to occur before I’d be ready for this!)

Go to a dungeon (just to watch at first).

Are you 18 or older? This website contains material that is not suitable for readers under the age of 18. Please verify your age to view the content, or click "Exit" to leave. Content Warning: If you are sensitive to content referring to dominance and submission, please proceed with caution.