The Sleeping Saint of Nevers

Prompt 2: “Write a poem that is inspired by the soundtrack from a film. If you want to get specific…focus the title of one of the songs or a section of the lyrics. Or, you could just play the soundtrack and see where it takes your mind…and your pen.”

The film/soundtrack I chose: Stigmata (1999)

Song: “Whatever Happened to Mary” by Chumbawamba (lyrics)

When I was in high school…and even into my first years of college…I spent a lot of time trying to figure out what I believed concerning my faith. I tried on a lot of things and found myself continuously drawn to my rather shaky Catholic roots. There was something about the rituals that I found deeply comforting and something about the rest of it that I found a bit unsettling, mysterious, and foreboding.

In 1999, I saw the film Stigmata, and I sort of figured out, during that first viewing, that what really bothered me most about many religions is that is put so much between the believer and their god. It made sense to me, and I stopped looking for where I belonged, spiritually speaking.

I also loved the soundtrack of the film. I wrote this poem, years ago, while listening to it.

It might also help to know that I had a rather deep interest in St. Bernadette of Lourdes, as she was designated my saint at birth (by my godparents). She was purported to have had the stigmata.

The Sleeping Saint of Nevers

I knew your face before your name;
it came to me in sleep
that looked like your death,
full of grace,
so little space between
the glass and your closed lids–
they hide the visions
of the apparitions
of Our Lady of Lourdes.

Your young body,
flesh of my saint,
still fresh when exhumed
Forty-six years from first burial:
it put their faith to the test.
Perfectly preserved.
They reserved a place in the chapel,
said it was a miracle.
The will of God.

The Feast of the Immaculate Conception
bore witness to the honor given
by the living.
The blessing
from the other side:
eternal beauty,
the ability to confound non-believers,
to make them question logic.

Chosen by godparents
to watch over my days;
they praised your piety and
sought you as the governess
of poverty and penance,
hoped to transmit to me
your strength in sickness,
your capacity to see beyond
what eyes can take in.
They knew I shared your stars,
hoped I might share your sensitivity,
your will, your sense of self-sacrifice.

Sometimes at night,
I lie on my back,
hands clasped around a rosary,
in a pose I have known since birth:
head slightly cocked to the left
as if to say
I will be at peace,
for I have been promised.

I see the Grotto of Massabielle,
the pilgrims lined up
to worship, to be healed
in the spring raised by
your own small fingers.

I see you dressed in 14 years of sickness,
the stench of cholera in your bones,
making you weak,
stealing your breath
as mine is often stolen.

I know the weight that bore down
upon your chest;
clasping at my own breast,
trying to stretch the lungs to
take in more air, holy water
to calm the fear of choking
on my own throat.

I know what you felt when you died,
the loss of fear at the end,
the knowledge that the Virgin did not lie:
I do not promise to make you happy in this life,
but in the next.

Que soy era Immaculta Conceptiou.
You took her message to the priest,
and the Order gave you the sanctuary
you sought. A child visionary:
the messenger of Mary.
Eighteen walks as Sister Marie-Bernard Soubirous,
giver of the spring,
keeping the Virgin’s secrets.

You took her words with you,
Hail Mary,
full of grace…
blessed are you
among women…
sighing your last breath…
pray for us…
at the hour of our death. 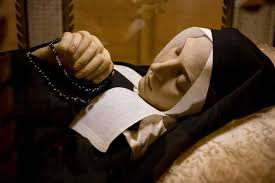 It’s not a sexy poem, but there is something deeply sensual about the idea of connecting with a spiritual power. Since it cannot (usually) be seen, it must be felt with the body and the mind. It must be accepted without proof. It surges through us, a vibrating energy. 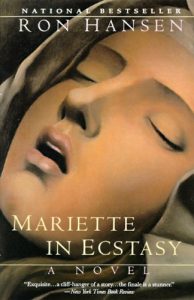 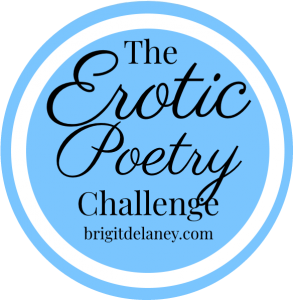 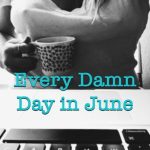 2 Replies to “The Sleeping Saint of Nevers”