Part 2 – The Disappearance of Emily Bennett

I took the proffered pieces of clothing and headed back toward the dressing room, returning to the register in a simple black sleeveless shift dress with a black cardigan and black slip-on flats. Underneath: black lace bralette and matching panties. That was all.

“If you’d like to tie your hair back, I have bands for that,” the shop girl noted.

“Yes, I think that would be perfect, thank you.”

She handed me a cardboard card with several bands wrapped around it. I took one, smoothed back my hair and alternated the pony tail through each hand a few times before wrapping the band around the base a few times to secure it.

“Is there a place to buy toiletries at the station? I need facial cleanser and some moisturizer.”

The girl nodded, her expression pleasant and open, “Yes, just a few doors down.”

Turning quickly, I left and headed down the direction she’d pointed, finding the items I needed and heading to the bathroom, where I cleansed my skin of make-up, patted dry, and smoothed on lotion with my finger tips. I looked different to myself. Younger. Less tired.

I emptied my bag of everything, aside from the items I thought I’d need: a comb, some lip gloss (which I applied), hand sanitizer, lotion, and my wallet. I’d rid myself of my phone and I.D. once I knew I was safe with the driver He had promised to send.

I would leave everything and everyone behind. For now.

The driver met me at the station, as promised. A perfect chiseled specimen of masculinity in a black suit, black leather gloves, sunglasses, and a driving cap. He didn’t smile, but he held a sign with my name: Bennett.

Following him, I focused on the breadth of his shoulders and the back of his neck. So little of his skin showed, but what did was tan and smooth. Perfectly groomed.

I noticed his ear piece right when he began to speak to the person on the other end of it, “Yes, she’s in my care, sir. No, nothing – just herself as you said. Absolutely. Right away.”

“This way, Miss.” He turned briefly to make eye contact and assure himself that I was still behind him.

As we reached the car, he opened the door for me, but before I could sit, he told me, “You’ll need to remove your clothing before you enter the car.”

My eyes widened and I swallowed, blinking in surprise. But I knew better than to question. Looking around to see if anyone was watching, I noticed several passengers wandering to and fro.

“But there are people…they could see…”

“It doesn’t matter,” the driver replied. His face solidified the fact that he didn’t care. Folding his hands in front of him, he stood by the open door and waited.

There was nothing else to do. So I unzipped my dress, letting it fall to the gravel beneath me. 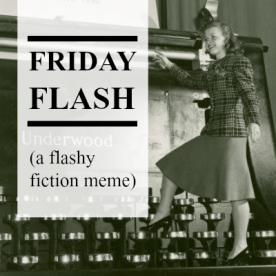 9 Replies to “Part 2 – The Disappearance of Emily Bennett”