The Wife Coach, part 2 “The Reply”

Jaime opened the box as the UPS truck backed out of her driveway. Spreading the tissue, she uncovered the black body stocking she’d ordered. After hours of searching, it was the one piece that had called to her. She’d never worn anything like it before. Not only was it beautiful, it was sexy in a way she’d never tried to be. It would surely make the statement that Everett had urged her to make.

She could hardly wait to get it on.

Having spent the morning shaving and primping, she felt fully prepared to accept what this lingerie had to offer. Even though she was likely putting too much pressure on a piece of elastic lace, she hoped it would, much like a superhero’s costume, infuse her with confidence and strength beyond that which she could humanly produce.

Running up to the bedroom, she slid out of her robe and sat down to carefully slip each of her legs into the stockings, pulling the rest of it up and over her hips, belly, and breasts.

Jaime looked are her reflection in the closet mirror and adjusted the pattern and seams. Happy with the result, she slipped her feet into the platform heels she’d bought for the occasion. Her hot-rolled curls cascaded softly down her back, and her red lips pouted just right.

Smoothed, scented, and ready, she waited to hear Kurt’s key in the door.

Moments later, she did, and her heart leapt into her throat. She was suddenly frozen and unsure, which seemed silly, considering this was a man she’d know for over ten years, who’d seen her at her best and worst. Today, however, he’d see her at her most vulnerable. She would see to that. It was her intention to give that to him.

The door opened in to the living room, where she stood waiting. Kurt stepped in and glanced up absently, hanging his keys on the key rack, before his eyes registered what they had seen.

He looked at her, eyes wide, eyebrows raised, lips pursed in question.

He closed the door behind him, placed his bag on the entryway bench, and remained glued to the entry mat, curiosity and confusion blending to create a mask for his features that Jaime wasn’t quite sure how to handle. She walked to him, carefully, one five inch heel in front of the other, and placed her palms on his chest. She leaned forward and kissed his earlobe, the edge of his jaw, his neck, and then his lips.

“What would you like me to do, Kurt? My wish is your command.” She felt vaguely silly trying to be so sexy and submissive, but she let the costume guide her words.

“Ummmm….I’m not sure, Jaime,” he stuttered a bit, obviously battling his own suspicions and insecurities.

She took his hand and led him to the armchair, where he sat. Kneeling before him, she untied his boots and removed them, placing them next to the chair. Then she sidled between his knees, undid his belt, unzipped his pants, and eased him from the flap in his boxer briefs. She looked into his baffled face, bit her lip, and winked at him before she leaned forward and took him into her mouth. The heat of her breath and the softness of her tongue brought his confused cock to life.

“Tell me how you like it, Kurt…” She looked up at him through thick lashes and licked the underside of his shaft from base to tip.

“Mmmmhmmmm….” Jaime let the vibratory hum of her audible response massage his penis as she sucked his head between her tongue and the roof of her mouth.

He laid his head back on the chair and groaned.

“Don’t stop…suck harder…” He was finding his voice, and it was making Jaime wet. He placed his hand on the back of her head and guided her down, his cock edging deeper into her mouth to the back of her throat.

He writhed, and she reached both hands around his hips, sliding them under to grab hold of his ass.

“Stop…” he said, and she did, her eyes looking up at him in question.

“Turn around and face the window, on all fours,” his orders were spoken slowly, confidently, and she did as he commanded.

She put her face down on the carpet, her nether regions completely exposed, framed in lace.

He let her sit there just long enough to make her uncomfortable.

She felt his finger lightly touching her clit, then two fingers spreading her labia, and finally a finger circling her asshole, which she clenched in surprise.

“Oh, Jaime, you’ve made me so happy,” he said, but he sounded like the wolf in a fairy tale when did.

She heard him spit into his hand, and then felt his thumb sliding into her ass as his hard cock slipped into her cunt.

“It’s been so long, Jaime. I don’t know what’s gotten into you…”

“You have, Kurt. You’ve gotten into me…”

She thought about it a moment, and then continued, “Will you pull my hair, like you used to?”

“Oh, Jaime…I love that you asked. But you forgotten the magic word…”

She paused, her heart catching in her throat. He was going there. He was actually going there. His tone had changed from questioning and confused to serious and commanding.

He paused, and she held her breath, hoping it was what he was expecting.

He plunged into her, grabbing a fistful of her hair, pulling her head back as far is it would go, and she came in a flood, as if she’d been holding back for decades.

“That’s my little slut, so fucking wet, coming so hard…I missed that, Jaime….I missed that so much…”

She felt the heat of his orgasm inside her and melted around him.

Slowly, he pulled out of her and sat back in the chair, but she stayed where she was, waiting for his instruction.

She turned to him and saw him patting his thighs, beckoning her to his lap. She followed his command, and he held her for what seemed like hours.

“We’re going to have to talk about this, Jaime. But not today. Not today. Go upstairs and put on something nice. I’m taking you to dinner.”

She climbed out of his lap and began walking toward the stairs.

“Leave that on underneath.”

She couldn’t wait to tell Everett what had happened. 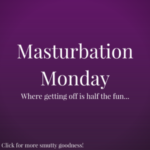