So I had a bad weekend. My mood dropped dramatically, and I found myself fighting to stay afloat in my head. I’ll be okay…don’t worry. I have times like this. Depression never fully goes away, and I often feel like I’m just a few steps ahead of the demon.

Both Mr. D and I deal with it, so we take care of each other when the monsters come to call.

That’s one of the things I love most about my marriage. How we take care of each other.

I read tons of blogs and websites each week, not only for fun, but research. Somehow, I headed down a particular rabbit hole…oh wait…I know exactly how I got there–I was reading a twitter post from Jack (Frisky in the 916) that discussed explaining poly terminology to someone who didn’t know much about it. The two words he listed were “compersion” and “NRE.” I asked my husband, who was on the couch beside me, what those two words meant. He didn’t know either. So, I looked them up, and I read the definitions to my husband. Of course, just mentioning these topics caused a cloud to send barely visible shadows across his face, but I certainly felt the room drop in temperature a 10th of a degree. I’m perceptive to his mood shifts, and the mere mention of polyamory sent the corners of his mouth downward a bit.

See, Mr. D is likely polyamorous. I, however, am not.

Now, I don’t know as much as I probably should about polyamory. But, years ago, when Mr. D expressed an interest and told me that he’d like to date another woman, I figured I had better educate myself.

(Side note: Mr. D’s parents were in a poly relationship for years. I knew this when I started dating him. I did not, however, know that he was interested in polyamory for himself until well into our marriage. I’m not sure he did, either. We all change and evolve. And I think some of our problems with sexual compatibility gave him the idea to fulfill his needs in ways that he felt would not require much from me, other than acceptance. He wanted to explore domination in a much deeper way than I was ready for, so he wanted to have a sub who was separate from our relationship. But, because of the kind of guy he is, he knew this would likely turn into a romantic relationship, as well. He was open to that. It terrified the hell out of me. Eventually, it fell apart, in epic fashion. A story for another day…)

(Side note 2: Mr. D is a bit socially awkward…but he’s never awkward in the bedroom. He has quite a bit of sexual power and prowess and knows how to please a woman. I think that makes him feel confident. Because he doesn’t have many friends that he hangs out with, I think polyamory would also be a way to build a relationship with someone other than me. As it stands, he relies on me to be everything to him, which is part of what depresses him. I can’t be everything. And I don’t like everything he likes. This leaves him feeling lonely. But honestly, he’s sort of an odd duck – which is what I love about it him. It does make it hard for him to make friends, though. I’m an odd duck, too, which is why we fit together so well. But, expecting one person to be friend, lover, partner, etc. isn’t fair. I think if he had friends to go do stuff with – away from me, he’d be happier and more fulfilled. I also think he’d be happier if he worked out and did more to curb his depression. But, of course, I have no control over that. I don’t feel that polyamory is going to fix his situation, but it will likely make him feel more confident, less bored, and more worthy.)

I’ve read several books (mainly memoirs to help me understand who and what and where and why and how this works for people). Theoretically, it would work for us. Except…that I’m not polyamorous. Nor do I ever want to be. And it kind of aggravates me when people ask me why or try to convince me that, if I’d just relax and come to terms with my jealousy issues I’d realize that…I’m wrong. About everything.

You see, after many conversations, several films, TV shows, and books, and much searching on the internets, I have come to believe that a large portion of our society not only believes that monogamy is dead (or dying), but that it also goes against human nature. And don’t get me wrong…many of the arguments against it are valid. But, I also worry that, like so much else in modern society, relationships have become “throw-away” commodities. It’s a huge can of worms, and I’m not trying to start a riot, but I think there are benefits to monogamy. Just as there are benefits to polyamory.

Maybe I’m just sensitive, but it feels like being “vanilla” is no longer acceptable. I feel that I’m being told (by media and the blogging world) that if I’m not kinky or poly I’m just not open-minded enough. And if I’d just open my mind more and relax, I’d see that all of us are just trying to fit ourselves into some socially constructed box…and none of us could possibly devote ourselves to one person for life and be happy. 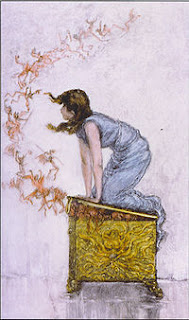 Accept that…some of us can…and want to.

Even if it’s just because that is the way we were raised. I don’t feel like I should always have to explain WHY I want something. Why can’t it just be because I like it?

Except…I’ll be honest…I don’t really like my marriage the way it is. I like the concept of monogamy…the ideal. I’d like it if I weren’t the only one in my marriage who wanted it.

Maybe it’s simply having the option that caused our problems. Like a Chinese menu with too many possibilities, if we’d just kept Pandora’s Box closed…

Sorry for the rather stream-of-consciousness post. I’m not sure exactly how to write about this. But, I feel that monogamy gets a bad reputation. And I feel that, like the prudish girl with glasses who sits alone at lunch with a book, it can be a lot deeper and expansive than one might think. Maybe it’s just the world I live and write in that makes me feel that monogamy us under attack. And maybe I’m taking things too personally. But, I get a lot of advice that sounds much like “just let him have a girlfriend, and you’ll be happier” or “go your separate ways and find people who want what you want” or “if you got a boyfriend of your own, you’d see what all the fuss was about.”

He would love for me to have a boyfriend. He would love to have a girlfriend. Does that make him a better person? Because I sort of feel like that’s what people are telling me: he’s so much more selfless because he wants me to be happy, polyamory is social evolution, and I’m a selfish bitch because I’m controlling and jealous and unwilling to let him be free in our marriage.

(If you love something, set it free, right?)

It’d be one thing, if all of these things had been discussed before we got married. But they weren’t. Not openly. Sure there were probably a few veiled suggestions, but nothing like, “So, hey, when and if we get married, this is what I want it to be like…”

I get that we change. And I understand that this is now where we are. I’m just not sure how to adapt, because let’s be honest…if anyone is adapting, it’s me. He won’t adapt; he’ll martyr himself and make sure I’m aware that he is martyring himself. He won’t be shitty about it…rub it in my face. But I’ll know that he’s unhappy and that he is choosing to be unhappy to stay in our marriage, because he…like me…is unwilling to give it up. There is too much that is good about us, despite my complaints. I probably don’t write enough about what is good, which leads readers to think, What the fuck…why don’t they just go their separate ways…they’re both unhappy?

My gut says that I have no choice but to leave or let him be free in our marriage. And neither of those options make me feel good.

And btw…I’m sure I’ve managed to offend someone (or many someones) here…either with my ignorance or with my dissatisfaction. It’s not my intention to judge anyone else’s relationship. I’ve had so many people over the years tell me just to drink the Koolaid and I’ll be happier. Maybe that’s true. I know I’ve certainly tried to make my brain and heart accept another person into our mix, if only to make him happier. And maybe that is the best solution. All I know is that something…or someone…is going to have to give.

Wide Open (memoir) – I read this one a long time ago…but it was interesting, and I’d suggest it for anyone interested in exploring a poly relationship.

Monogamy exists in nature – not a real long list, but it goes to show that, just like everything else, there is something in nature that substantiates it as “normal”…or at least not “odd” or “wrong”…

Sex at Dawn (book) – I have a love/hate relationship with this book. It’s well-written and interesting, but…

Mosuo “Walking Marriages” – I just learned of this area and its cultural practices. It surprises me that it exists in China, but hey…who am I to judge. I’d definitely be willing to go on a pilgrimage to learn from them, though.

“No Holds Barred: The growing assault on love and marriage” – from the Jerusalem Post (obvious bias, I know)

Sexual Misadventures: Overthinking My Way Through Sex, Kink, Polyamory, and Mental Health – currently on my “to be read” list

Will I ever wear real clothes again?

I’m going on an adventure!