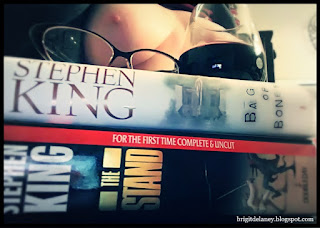 I didn’t do ANY writing yesterday. Basically, I napped, watched TV, and sat around reading all day. The benefit of that, however (and there were actually several, since it was gloomy and I had nothing planned anyway), is that I finished my first book of the year and made significant progress on the behemoth I have now committed myself to.

I did not work out, so basically January is turning into a bit of a fail in the “fitness” arena. (Not counting yoga, I’ve worked out twice.)

And I didn’t have sex (not particularly looking my hottest, despite what this photo might be attempting to persuade you to believe). So…January is also not looking particularly successful in the “sex” camp, either. We had sex the day Mr. D left for his business trip and the day after he returned, which smells suspiciously of obligation.

There were some delicious hints of hope this last time we had sex, though. For example, he grabbed my hand and pulled me into the bedroom, wouldn’t let me undress myself, told me to lay face down, pulled my hair rather hard. All those little things make me miss some of the D/s aspects our relationship used to have.

I’m not saying I want to re-commit to a life of 24/7 D/s. That ship has sailed, and for good reason. He loved it. Every little bit of it, from what I can tell. But, I couldn’t maintain the role all. the. damn. time.

I like him in charge. I like the rough edge of sex. But I don’t miss the contract or requirements or the punishment. Maybe you could say I like to have my cake and eat it, too…I know Mr. D would say I like things the way I like them when I like them. It’s one of his main grievances. The push-pull of control is hard for both of us.

I spend all day at work “in control.” And while I do like to surrender most of it when I get home, I find myself being sort of a control freak about everything. In a lot of ways, I think that has broken Mr. D’s spirit. Because his natural or preferred way of being is to be in control all the time. My seemingly constant, subconscious usurpation of that control is damaging to him.

Don’t get me wrong…he likes a strong woman. One who speaks her mind and knows what she wants (namely him), but he wants her to ask for him…beg for him…and offer herself up to him. He wants her to be fun and sexual and willing. I am not often that woman anymore. But, over the years, I’ve pretty much shut the door on that woman being anyone except me.

I don’t like to share. And that comes with certain obligations…most of which I have not fulfilled.

I know I carry my share of the blame for his lack of libido these days. And we’ve got a lot of work to do, together, to build ourselves back up to even having conversations about what elements of D/s (or anything, for that matter) still belong in our world.

But, like the uncut edition of the mammoth book I have anchored myself to, willingly and with stalwart determination, I am committed to rebuilding what Mr. D and I have. I don’t want to rebuild it the same way it was before. It didn’t work. But there were parts that did, so we’re using many of the same materials.

He’s busy trying to regain his libido…using a plethora of supplements and herbs. My part is supposed to be “initiation…” showing him he is indeed desired and desirable. I haven’t done a great job of that so far this month. But then, he was gone for a whole week, and the month is not over, so I’m not giving up on myself, yet. The first week of the month, he was laid up with a sprained ankle. The second, he was gone. Now, the third, I am sick. It sort of feels like the world is conspiring against us.

I’ve determined that the foundation of this marriage is solid: friendship. love, connection. But the structure? Well, I think it was originally half-way built on desire and sex.

So let me continue with this metaphor.

If our marriage is a house…when we were first together, we had a rather shaky foundation, because it was built on unknowns and the separate expectations of two different people. We threw up some hasty walls made of sex, sex, and more sex, and decorated it with lust and fun. There was a mattress on the floor and blankets to cover the windows. It was temporary shelter.

When we fell in love, we poured a more solid foundation under the original weak building, and we built on from there. But as we continued to build, we worked harder (or at least I did) at making it look like a a proper nest. I fell prey to the same cycle that so many women find themselves in. We started our family, and my focus changed. not just a little…but almost completely. And in desperation, he swung the pendulum so far back the other way, that we found ourselves off kilter. Rather than asking to remodel…he brought in the wrecking ball and starting re-planning the whole thing.

Our sex life became a parody…and not a very funny one. I strayed further and further from myself to appease him. And he led me further and further down a dark hallway in search of solace and “something new.” Ever the hunter, he continued to seek. And somewhere along the way, we left me behind.

I want him to feel safe experimenting with me and telling me his desires. He’s not one to really speak them much. He’d much rather simply do it and gauge my reaction, which is fine, I just have to get better at not over-reacting or saying no before I’m sure, and not saying yes just to placate him. This is not a conversation about consent, so please oh please don’t go there. This is more a conversation about us building a home that works for both of us…that feels safe and expansive, warm and inviting, creative and open.

I’ve said no to enough things over the past few years, I’m also fairly certain that he’s afraid to do or ask for anything. That, of course, sort of leaves the ball in my court…not where I want it.

Anyway, enough for today. I’m rambling because I’m ill. Off to fiction-land, where I can forget the rest of the world for awhile.