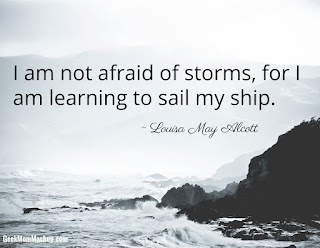 Storms are interesting creatures. They can be short and intense, long and destructive. They can arrive few and far between, or hit one after the other.

One thing that is for certain is…storms eventually return. And we all have to endure them.

Another thing that is for certain is…there are things we can learn during a storm that we can’t learn anywhere else. We learn how strong we are. We learn what really matters.

When a storm begins, we are often quickly swept into the chaos; it is easy to lose our way…and our hope.

Stand in the midst of a storm long enough, though, and something within us has to give. We either give up and let the storm wash us away, or we find stores of resolve within ourselves and we rage or calm ourselves in accordance with our hearts.

Another thing I have learned about storms is that there is something clarifying about being in the midst of chaos. In the eye of the storm, it is easy to let go of the periphery. What matters most becomes so intensely obvious. It’s like climbing to the top of a mountain to see a wise man about the meaning of life. Suddenly, it’s just there…in all of its simplicity. Like a riddle laid bare, what we seek turns out to be something so much less complicated and yet so much bigger than we could ever explain.

All I can think to call it is…enlightenment. An awakening of the soul.

After the storm, it is easy, and sometimes necessary, to forget how terrible and destructive it was. But every storm leaves with us it’s message. It sends us into the future stripped of illusions. We are strong…but we are not unbreakable.

Storms disturb the status quo. They shake things up and rearrange everything. Sometimes they take away. And sometimes they leave behind.

In my case, the storm has left me with perspective. It left me just raw enough and just emotionally exhausted enough to open wider to him than I have in the past.

There is no such thing as a blank canvas. We all bring our baggage and memories and history with us. We can put all the written pages we have created in a box and hide them in the closet, but we will still know they are there. And burning them doesn’t erase the fact that they were written. However, drafts are simply that…drafts.

We are in a constant state of becoming. Transformation never ceases.

It is okay to look back and see a self that we can no longer be. But, pieces of that self will always be used to build the new.

Sinful Sunday is now in His hands

What Submission Means to Me