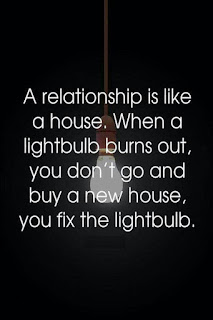 I don’t have the happiest marriage right now (haven’t for some time). It’s not as strong as it should be or could be. It’s like a starving, feral kitten that I just found under the porch. Or more aptly, it’s an abused dog that’s been chained to the fence and now growls (understandably) every time I try to get near.

I’m not saying I’m the only one at fault for the condition of our relationship. No, our history is long, varied, and very much of OUR making. We, like many spouses, have done things to each other…ugly things…things that will never be forgotten, even if they are forgiven.

I’m certain that most marriages can be salvaged, regardless of the history or present conditions, if both parties want badly enough to save it. In this case, we both do…desperately. And we have for years. Which begs the question, if we both want to fix it, why haven’t we just done it already?

Dear reader, I’m sure you understand, as well as I, that questions are often much simpler than their answers. So rather than try (and fail) to answer the question, since that would likely take too long and lead me nowhere, I’m just going to focus on the “fix” part, even though I’m not positive how to do that, either. At least “fixing” involves action.

In the past, when I’ve tried to “fix” things, according to my husband, it’s been mainly with myself in mind. He’s come right out and called me selfish in pretty much every capacity. I can’t argue with him, though I’d defend myself by saying that I’ve had the best of intentions (I know, I know…road to hell and all). I’ve come up with creative dates, calendared quality time, initiated sex (a few – but not enough – times). But in all of these endeavors, in his view, I have met my needs rather than his.

I have a hard time wrapping my brain around his perspective, because, in all (or most) of these cases, I’ve attempted to do what he has asked…to put him first, to add adventure to our sex life, and to fulfill his need to feel desired.

And yet, I’ve failed nearly every time.

Which leaves me wondering, when did I forget how to love my husband correctly? Because there is a right way and wrong way to love someone. I can continue to love him in my way, but doing so will end up leaving me alone, loving an ex-husband who may someday become a friend but will always be a regret. Or I can somehow learn (re-learn) to love him the way he needs me to.

He’s not asking too much. He’s asking for passion. And we had it, in the beginning. What was different back then? Apparently, a lot. I had just met this young, hot mechanic who built hot rods, listened to rockabilly, and smoked cigarettes. His blue eyes bore a hole right through me as he listened intently to my dreams and fucked me like he meant to make me an eternal part of his mattress. He lived in a double-wide trailer, had a dog, wore a vintage motorcycle jacket, and I fell hard for all of it, quickly. His bad-boy facade drew me in, but his hot, creamy center kept me coming back for more.

Our relationship grew quickly, out of sex and beer and late nights dancing and spilling our dreams like so many pearls across a laminate floor.

Now that I look back on it, we didn’t really have that much in common. But, we fell in lust and then love, and we had that, and music, and sex, and alcohol, and dreams that we thought we could build together.

About a year and a half after we met, we got married, and about a year after that, we had our son. And everything changed. As it does for so many couples, the birth of our child was both a blessing and a curse. A blessing to our lives, but a curse upon our bed. The birth was traumatic, I nearly lost my life, and I walked away from it unable to have any more children. There was no quick “bounce back,” and the physical and emotional healing took a great deal of time…much longer than he was ready to wait. He sought desperately to “fix” our sex life, but the attempts left me feeling raw and disappointing. I felt broken.

Eventually, sex did feel good again, but it took a long time. And by the time it did, I found myself mired in a messy quilt of swinging and D/s and role-playing, with which we tried to cover the growing crack in our relationship. But the cavern simply widened. I grew increasingly wary of our trajectory. I wanted a “normal” relationship with a few frills on the side. I didn’t want my husband to have a long-term girlfriend, or for us to spend every weekend at a hotel take-over or perusing the personals for couples. I didn’t want every sexual encounter to be painted with the brush of lust. I wanted comfort. I wanted to relax and just be myself. But I’d let myself stray far from my comfort zone, and the glitter and sequins and sex toys were starting to wear on me. Suddenly, the inauthenticity of it all began to suffocate me.

All of it was an experiment (for me). And a poorly executed one. I said yes to nearly every possibility in an attempt to “save” us and make him happy. Unfortunately, doing so pushed us to near ruin. We saw counselor after counselor trying to seek a middle ground…a compromise between our sexual needs.

I honestly wasn’t lying or being dishonest by trying on all of those possibilities. At the time, it felt like the right and necessary thing to do. And I spent so much time ruminating and convincing myself that it was what I wanted, too, that I most often felt like I did. I guess it’s sort of like a meat-eater deciding to try on veganism for awhile. I could do it. I could force myself. I could tell the whole world that I was happier and healthier. But eventually, the hunger and truth started to bleed through. I was not happier. Nor was I healthier. I was disenchanted.

The other problem? He was not. He loved the adventure of it all. And now that he’d tasted deeply of the well, he wanted more and wasn’t about to be satisfied giving it all up. I don’t blame him.

Sometimes, I find myself wishing I’d said no, all those years ago, when he asked me to check out a particular swingers website and see if it was something I’d consider trying. But, honestly, I believe we would have simply fallen apart sooner.

He needs something. Something that I don’t. Something that is, in some ways, counter to what I need. It’s not that I think we can’t find common ground, but I’ve never figured out how it’s possible for one of us who needs adventure to make a life with the other who needs comfort and the known. We’ve tried several options, none of which have worked, and all of which have left me feeling like the selfish, jealous, bad guy who can’t seem to let her husband have any fun.

But, it’s not about fun, now, really…is it? It’s about building a life. About loving. And about meeting each other’s most basic soul needs. He feels he’s done that for me. And I would agree that he has done a valiant job of trying. However, I’m still not happy, either. His laziness irks me. His obsession with sex frustrates me. And his constant moroseness about not having it pulls me down under the waves with him. He is unhappy in life, and I become the focus of that unhappiness. The stress of his job, his lack of close friends, his health, his drinking, the plugging in and tuning out. None of it is my fault, I know that…but it compounds itself, and I become either the saving grace or the catalyst.

Maybe my absence would lead to his healing. Or maybe it would be his downfall.

What I do know, is…I hold my share of the blame. And I have no idea where to go from here.