Diary of a Submissive: A Modern True Tale of Sexual Awakening by Sophie Morgan 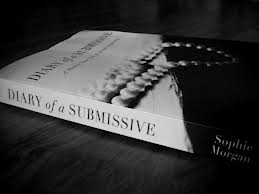 This one was an unbelievably quick read…mainly because it feels like having a conversation, albeit a naughty one, over coffee.  Morgan comes across as funny and honest about her experiences as a submissive.  What makes the book so charming is her witty banter…and it was easy to see myself in her words.

She begins writing in the 2nd person, pulling the reader into the position of voyeur, describing a moderately intense D/s public scene, and then immediately follows up by introducing herself as a “normal” girl with a “normal” background – normal parents, happy childhood, successful college years and a career…basically setting up the statement that D/s is not the outcome of a screwed up childhood or backwards sexual proclivities resulting from an abusive upbringing plagued by neglect.

Morgan gives the reader an opportunity to spend a few days in the head of a submissive…as she becomes one.  Very intriguing, indeed, as I find myself in a very similar situation – with my own variations, of course.  She explains how, as she was first learning, the internet was the mecca of information and the best way to meet up with like-minds:  “I genuinely think that the internet has, for all intents and purposes, changed the landscape of sexuality.  No matter how perverse your kink, you can bet there is someone out there on the web who shares it.  Unfortunately, there’re probably another three who actually think your kink is not perverted enough and given half the chance will tell you how the way they do it is more intense/sexier/just outright better than yours.”

Her distaste for some of the “norms” of D/s struck a chord with me, as I agreed with so much of it.  For example:  “It felt like a whole new world full of people who knew each other and were talking a language that I didn’t quite grasp, with many using an elaborate form of pronouns (always capitalized for the dominant, always lowercase for the submissive no matter whether it was the start of a sentence or the world “I”), which I found ridiculous.  I decided quickly that committing crimes against grammar was a hard limit for me.”  Ummm….ditto.  Morgan’s English-geek humor made me laugh – mostly because I could totally relate with her eye-rolls and groans over online chats with people who could not be bothered with “quaint concepts like punctuation….–RU feeling horny filthy bitch?  Do U want to knew before you’re master?  –No, because you talk in text speak and don’t know the difference between “your” and “you’re” and I’m enough of a grammar fascist that on that basis I don’t think I could submit to you, sorry.”

Eventually, her research landed her in the midst of a real relationship, where she learned that “the key to sexual humiliation is not about making somebody do something they don’t want to do, it is about leading them to do things they secretly dream about doing.”  While I am not necessarily into humiliation, this statement sent off the buzzer in my head – ding, ding, ding! – because that is exactly how I see D/s…”It’s more about someone knowing how far I’d like to go and helping me find the courage to go for it.”

Morgan opens the windows and doors wide, letting us in to watch as she gives herself to a Dom named Thomas, who teaches her quite a bit about her desires and limits.  But it is when she meets James that she finds her true place, describing some insanely intense moments when he damn near breaks her, leading her to a sort of sexual, emotional, and mental catharsis.

Really, the scenes she describes aren’t anything new…but the sharing of her mental processes, her emotional evolution, is the real gem of this book.  She explains how, as she gives into James’s demands, she has to navigate her own desires, challenging herself to understand what she wants and why she wants it, without judging herself: the confusion of loving and hating her needs, appreciating her Sir and detesting his debasement of her, all the complexities of putting wordless hungers in print for the world to devour.  In true anthropological style, she investigates the mental struggle a sub might have over her need to be dominated and her need to be her own individual with strong opinions and a demanding career.

The first, a night when James flogs her until she breaks into shaking sobs, mainly because she is unwilling to give in and use her safe word when she wants so much to prove she can withstand what he is dishing out, not only to herself, because she is stubborn and competitive, but to him, because she wants to please him and show him she can do what he asks of her.  I can completely understand this – the internal struggle of wondering – why do I want this?  why do I want this man to do this to me?  does this make me weak?  Even the anger she feels toward him periodically makes perfect sense.

The second, a night when, while on a business trip, James calls to explain, very sternly that she has neglected to do what he has asked, which is to write something for him.  She has missed her “deadline” and has selfishly ignored his requests.  She feels horrible, but, as is the case in D/s, she knows that there will be hell to pay.  Interestingly, he has already thought ahead to the likelihood of her failure (which makes her feel even worse…that he knows her this well – and that this is what she has proven to him) and has packed the implements of her punishment…3 sets of chopsticks and several rubber bands.  He instructs her to put them on her nipples and clitoris, which she does.  She is amazed at her willingness to follow his orders, even hundreds of miles away…punishing herself under his instruction.  There is this much need to please the Dom…and this much guilt and shame in disappointing him.  An amazing dynamic.

I personally have had these internal monologues…the petulant child inside wants so much to talk back, but somehow…she doesn’t.  I bite my tongue and accept the “punishment”…and alter my behavior even though it pisses me off that his treating me like a child to be taken over the knee – works.  For example…I have a habit of leaving my keys in the door.  Mr. LL has “corrected” me for this.  And I coyly smile when he tuts and tsks my forgetfulness (which wordlessly promises that I will be feeling the smack of his hand on my ass for it).  I have a child, whom I correct in a similar way…which is probably why it annoys me that Mr. LL treats me like a child – but it annoys me even more that it turns me on to be treated this way.  Today…when I “almost” left the keys in the door – in fact, I did and walked away, noticing it just before he did – I nearly tripped over my own feet to get back to the door and hang them up where they belonged before he noticed.

That’s the sort of thing Morgan gets at…the way the right Dom knows his sub better, sometimes, than she knows herself….knows the kinds of challenges she needs….knows just how far he can push her….knows she needs him to take her there, even if she’s kicking and screaming.

Anyhow, I highly recommend the book.  It’s not a how-to or an explanation of how to be a good sub or Dom.  It’s simply her story.  And it’s quite hot…and humorous.

No Ordinary Love, the sequel to Diary of a Submissive is also available at Amazon.  Both books have earned 4-4.5 stars from Amazon Reviews.